Hope,
the feeling that what you want can be had,
that something you look forward to with great desire.
You place trust in it,
and it is connected to faith and love.
And when hope does spring eternal
it brings with it the anticipation of new beginnings.
7000 diseases are classified as rare, affecting 250 million people, most of which are children. So one community of millions was started in hope there would be more value in one large group. In January 2010 they started a grass roots organization called The Global Genes Project to unify, support, and build awareness.
So The Global Genes Project volunteer team is collecting bracelets with a denim/blue jean theme for their campaign, "7000 Bracelets of hope." These bracelets will be collected and distributed as a show of support to families with children of rare disease or disorder.
I chose to do this project for many reasons, but mostly because I too am a face of a rare disorder. Earlier this year I was diagnosed with a localized scleroderma and have also battled with Restless Legs Syndrome for years. RLS is a sleep disorder and at times extremely difficult to live with. I am very fortunate to have it mostly under control right now, except for the occasional flare-ups.
I knew I wanted to put just a touch of color in my bracelet, but stay very much in keeping with the blue jean theme. So just on Wednesday of this week at my metals class, I made a torch-enameled flower that I sawed out of 20 Ga copper sheet. I chose a flower shape because flowers remind me of Spring and Spring brings with it the hope of renewal. 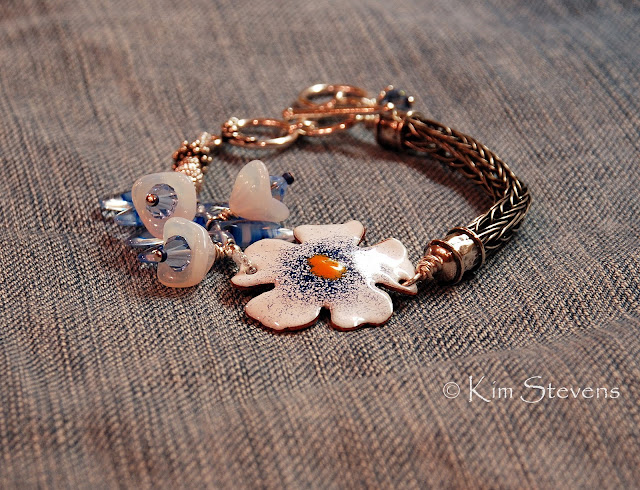 I also wanted to do something asymmetrical as there are always two sides of disease.
The ebb and flow.
I had just the right length of viking knit that was left from another project - bonus! 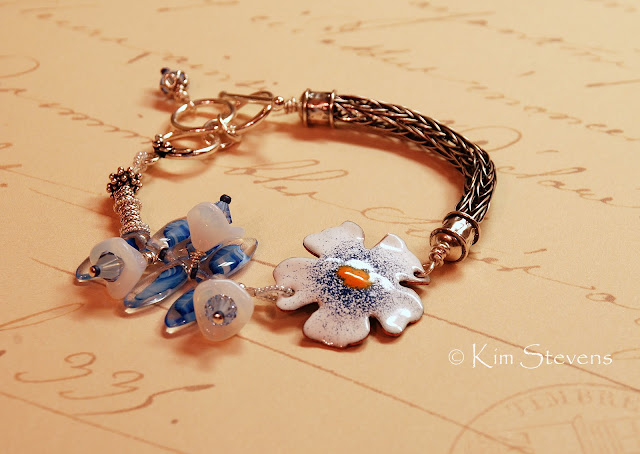 And added some flower dangles and blue daggers as leaves. 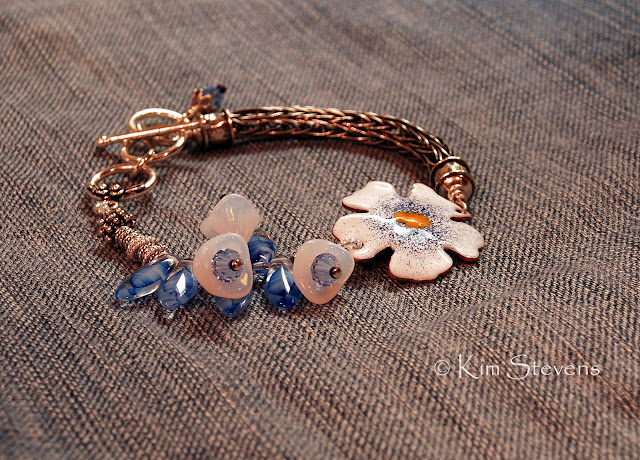 If you look closely on the left, after the blue daggers you'll see three floating silver twisted rings.
They represent Hope, Love, and Faith,
and the Holy Trinity.
This is also a blog hop and there are many other artists/jewelry designers and crafters participating.
You can go here to see what everyone else has made - see ya there!
I wish you a weekend of hope fulfilled!
Love, Kim
XO
Posted by Kim Stevens at 7:23 AM

Wow, Kim, this is such a beautiful piece of jewelry. The work is exquisite, which of course, is typical for your creations, but this one is extra special, because of its purpose. I love the symbolism you've included in your design. Wonderful, my friend!

WOW! my jaw dropped...this is beautiful. i am very drawn to fringe and movement.

Yes it's a wonderful bracelet.

Honey from the Bee said...

Very beautiful, Kim. Was it cathartic to work on due to your diagnosis? I'm imagining it would've been. Take care my friend.

What a lovely bracelet -- love the Viking Knit. Good luck with your health journey and thank you for participating in such a worthy project!!

absolutely beautiful design...I love it!! I love the though process that went into your finished product. Much luck to you with your own health and I'm very certain that whomever receives this with your message for hope will love it as much as I do!

Everything about this is AWESOME !
Your enamel flower is soooooooooo lovely !
the meaning of the components in this creation makes it truly special!
m.e. :)

What a lovely bracelet! It will make someone's day to receive it for sure.

This is so stunning and I hope that all goes well with your health. I just loved the thought you put into your bracelet and I know you will be blessed back.

That is gorgeous! And my husband has RLS, too - it makes my already difficult sleep even more of a challenge -- interestingly, he can sleep soundly. I'm glad for that.

Thanks so much for participating!

Gorgeous! The enamel flower with just a touch of color is outstanding. I'm sure it will bring smiles to the recipient.

Kim, your bracelet is amazing! I love the enamel flower you made and the viking knit chain...just perfect!!

The Last Day One said...

Oh, this is perfect. The two sides/asymmetrical design, the focal, the sparkly dangles - perfect. The recipient is going to be thrilled!

Love the Viking Knit and the enameled flower you used to create the bracelet! Fabulous work!

Each bracelet I see is amazing...WOW! It is an honor to participate in this which all you talented Artisans...

This is really beautiful, from the viking knit to the flowers -- it's a wonderfully unique piece that the recipient will love!

Hey Kim, I love looking at your bracelet, it is so soft and so beautiful. And I loved also that you shared so much about yourself and how you created this piece ... thank you and all the best to you and your family.
SusanMarie

Wow, so much thought and meaning in this bracelet - it's just wonderful!

this is total awesomesauce!I love the enameled flower, the dangles,the knit...ok you get the idea

That is a beautiful piece of jewelry! What a lovely bracelet for someone who needs to be lifted up!

Prayers for you... this is a beautiful bracelet and will make someone smile for sure! I love the meaning behind it!

Kim, oh goodness, this bracelet just blows me away. It's gorgeous!

I really love this! The contrast of the chunky chain and the delicate flower, the colors and metal, everything comes together and it is soooo pretty!!! Someone is going to love this.

What a beautiful mix of wonderful components! I'd love to wear this bracelet and know it will bring the recipient hope and love.

Thank you all so very much for stopping by and for all the wonderful comments!! I still have half the list to finish - I was at my son's five, yes five touch football games for 8 hours today. They did take 2nd in state though! Can't wait to visit all the rest tomorrow.

Beautiful design! The Viking knit adds a nice touch to the design of the bracelet. Love it!

Oh WOW!!!! What an incredibly gorgeous bracelet. I love how you focused on the meaning behind your choices in your design - like the (amazing) enameled flower and the two different sides to the bracelet. I've enjoyed visiting your older blog posts as well just to see your awesome photography! You have so many talents!

Such a beautiful bracelet friend! Thank you for sharing your creativity & hope for this very worthy cause!!
Smiles,
Susie

I'm making my way through all 112 participants of this blog hop. I've truly enjoyed all the blogs that joined in. Your bracelet is stunning, I would love to have it. :) I'm now a follower of your blog. #48

Very beautiful bracelet, love your enamel flower and the dangles next to it. Also I really like the viking knit in copper. Great choices lovely results!!

A beautiful design! I'm sure it will be well loved.

This is a WOW bracelet...love it.

I am just blown away by the beauty of this bracelet. I love that it has special meaning for you, thru your own struggles. I am frankly jealous that you got to create that awesome flower for it! Love that talent! I am sure the lovely mom who receives it will feel very special wearing this jewel.

Gorgeous and the thought you put into it's meaning is awesome. Well done!

This is one of my very favorite pieces, Kim (if not my favorite!) I love everything about it, down to that sweet little orange enameled dot in the flower. Thank you for sharing your story- I have been so touched to see so many participants share personal stories that relate to this cause.

Beautiful! All of your elements and the story behind them are so precious! Thanks for sharing. My heart goes out to all who struggle with rare diseases and I am so happy to think that all of our bracelets will bring a little shining spot of hope to 7000 families in need.

It is beautiful Kim! You did a great job =)...and I just love how you added the viking knit. Have only done it once, and would love to do it again, and teach it in a project!
Once again, this is a beautiful bracelet for a great cause. You should be so proud!
xoxo

Your work is just incredible. Just like your photography.

My son battles with Restless Leg too. He's also a brain tumor survivor.

What an amazing cause!!

This is a very cool bracelet!

"We shall not cease from exploration, and the end of all our exploring will be to arrive where we started and know the place for the first time."
- T.S. Eliot

Kim Stevens
Houston, TX, United States
I am a jewelry artist and photographer, both of which are inspired by my love of nature. Armed with my camera I could spend all day exploring the wonders of our world. I believe so much of the perspective of life changes when you look through the lens of a camera, and that miracles are discovered along the way.

My article as seen in:

It's not what you look at that matters, it's what you see.

"Let's dance in the sun, wearing wild flowers in our hair."