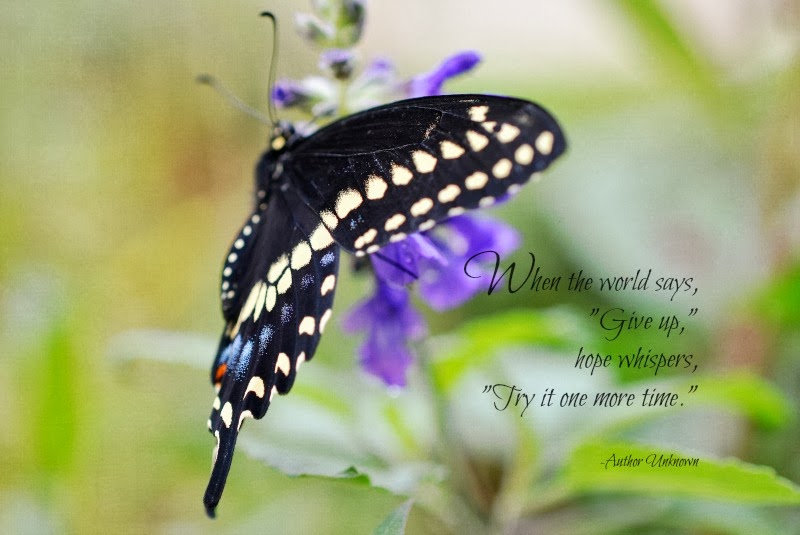 My connection this month is so much more than a connection of the heart kind to the photo itself
and rather to an experience. This male Black Swallowtail debuted last week. Yes this has happened before,
but . . . this was different.

In fact it was nothing short of miraculous. You see, it was a chrysalis that looked much like this one
only it was on the frame of the butterfly enclosure and it had pupated there. . . 5. . . months ago!

And have I mentioned that the typical time frame for a swallowtail to emerge after pupation is more
like 2 weeks. 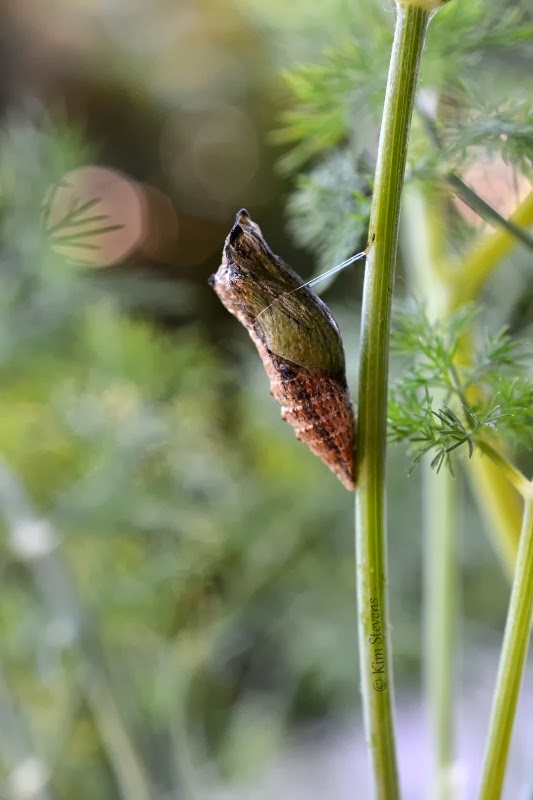 And honestly I think the only reason I noticed it was because I had put the Tersa Sphinx Moth caterpillars in the tent on a stalk of Pentas I cut from the plant, because they were eating faster than I could pick the leaves.

I had to wait a bit before releasing him outside as it was raining cats and dogs and after being asleep for 5 months I sure wanted to give him as much of a fighting chance as possible. It was last Thursday . . . and as soon as the monsoon rains stopped the skies parted and the sun came out. Heading out for a football game and knowing that we wouldn't be back until dark, I took him outside where he could rest until he was ready to take flight. 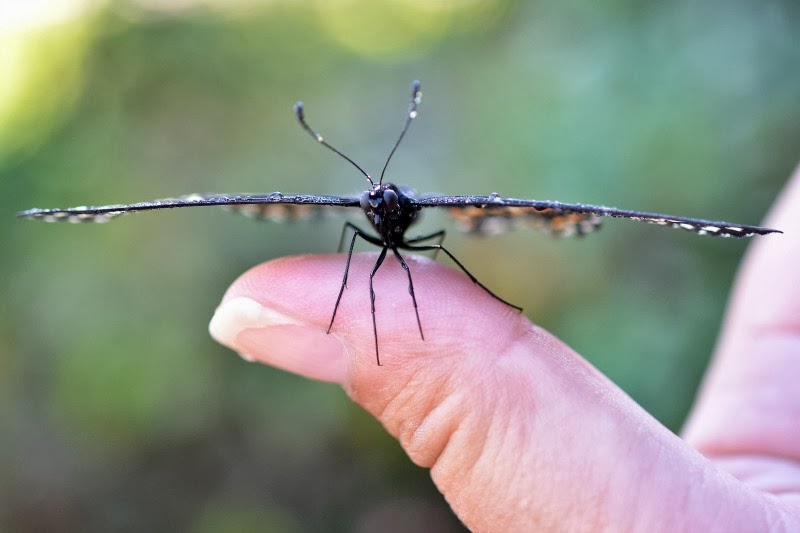 And much to my surprise, again, there he still was . . . completely covered in beautiful, sparkly, dew drops.
Right where I had left him. After a little photo shoot, he let me pick him up and I took him to a sunny spot on the trailing purple lantana to sun and dry himself. It wasn't long before he flew off.

Can you imagine if I had given up hope that he would ever emerge and removed it from the enclosure? 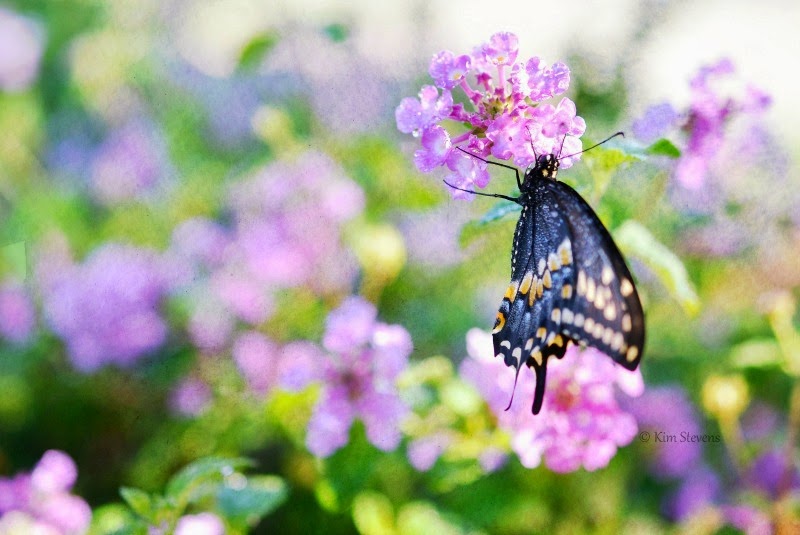 Yep, these photos, this happening, just remind me to not give up hope during those times when hope feels
lost. Not the hopeful "wishing" kind of hope, but the confident expectation . . . the trusting God for
the results kind of hope.

Because hope is still moving forward even when you feel weary and uncertain and gives life to things that
are so questionable, an outline of sorts to things we cannot see . . .

. . . and waiting for them with patience.

Fantastic story Kim! Thanks for sharing it and the photos rock too :)

These are such lovely images! You should think about printing out a book of your pics --if you have not already done so. They are THAT fantastic.

Such peaceful, beautiful photos. Just lovely. Thanks for sharing.

I love hearing these stories! You have such a tender touch and heart! Love the picture of it on your thumb!!

such a "feel good" post Kim-thank you so much
Kathy

What an amazing heart connection this month, Kim. What you have drawn out of this story is powerful. Thank you for sharing the story, and the beautiful images that go along with it. It needed all of them!

Oh I am in love with your images and what a lovely story...hope is sometimes all we have!!

Absolutely wonderful - the photos, the journaling...wow.

That's lovely - both the story,the quote and the images!

Oh Kim, this post hits me right in the perfect place today...beautiful, both your words and your images! What a gorgeous butterfly...he just needed a little more time. <3

Beautiful captures,and I like the texture in your last one.

Absolutely beautiful. We raised a few butterflies a couple years ago and had a blast watching them and capturing their photos. So very pretty!!

Boy, how I needed to read this today! There is a huge area of my life that I feel will never improve, never change. Miracles still happen, and this butterfly emerging after 5 months is miraculous in my book. It is God's message to remain hopeful, giving signs like this to encourage us. Beautiful images and message. :)

Amazing PHC this month Kim. I needed that reminder of hope. So beautiful and your love shines through.

These are all just gorgeous, what a beautiful job you've done.

Your writing is amazing Kim, as are these photos of this little butterfly's journey. xo

Thank you for putting hope into such a glorious definition. When you said hope is still moving forward...powerful words Kim. I need to remember this♥

This is such an amazing story, Kim, and I think the 'life lesson' you learned is what it's all about. Lovely!

I love that saying 'hope whispers'
You've written a very thoughtful post Kim and accompanied with those fantastic photgraphs it is just beautiful ;D

Oh, such lovely images! :)
And what a superb quote!

What a wonderful story of hope and perserverance -- what we can learn from nature! Your images are lovely! A perfect photo-heart connection.

A great story and an inspiring quote. Coming here is always an inspiration - both in terms of your words and your images.

I'm so happy you shared the love up-close with I Heart Macro:-)

Simply gorgeous, in awe and such beauty.

"Not the hopeful "wishing" kind of hope, but the confident expectation . . . the trusting God for
the results kind of hope." yes, Kim, yes!

There is so much here! I love the photos...you capture the detail and the delicate, fragile beauty so perfectly. And it is soul-soothing to tune into the great stories God tells us each day, in so many ways. It's an honor to share in your window to His heart!

How amazing this is, and don't you love how nature can give us these amazing lessons!!! Beautiful shots Kim

I have learned so much from you about this process. Lovely photos and how do you get them to sit on your fingers and hands like you do is beyond me.

Kim, your words of hope are complimented by a wonderful story and fabulous photos. Thank you!

Gorgeous shots! I think my favourite is the last one: love those blues and purples.

happy sigh Kim. first Ive always loved that quote. I have it written down for use at some time. what a story and such beauty you have captured. xo

What a beautiful PHC this month Kim and of course your pictures are stunning.

What a wonderful experience, gorgeous photos and an extremely beautiful post! Thank you for sharing Kim!

I have been inspired today by your story and by your beautiful photographs.....Sometimes we have to hold on to HOPE for dear life....Thank you so much....

Oh wow..beautiful series.. I had a similar experience this spring. I had kept a spicebush swallowtail in the garage last fall after I was told the last brood overwinters. I had breast cancer surgery and put him on the porch in the sun in May and I looked and there it was beautiful...made my day as I sat recovering on the porch...Michelle

My post about the spicebush who came in July and stayed till May...

What a fabulous story! So glad he made it! :)

This is such a wonderful message Kim. And your photos are amazing.. LOVE all of them.

I love what you wrote here. I needed that. (o:

Wow what an amazing miracle you were able to witness with this stunning butterfly. That is just awesome.

Beautiful photographs and inspirational words to accompany them!

"We shall not cease from exploration, and the end of all our exploring will be to arrive where we started and know the place for the first time."
- T.S. Eliot

Kim Stevens
Houston, TX, United States
I am a jewelry artist and photographer, both of which are inspired by my love of nature. Armed with my camera I could spend all day exploring the wonders of our world. I believe so much of the perspective of life changes when you look through the lens of a camera, and that miracles are discovered along the way.

My article as seen in:

It's not what you look at that matters, it's what you see.

"Let's dance in the sun, wearing wild flowers in our hair."